The Sony Xperia Z is similar in style to its rivals from Samsung Galaxy S4 and HTC One and in competition with Apple iPhone 5. Using Android Jelly Bean operating system the Xperia Z is a contender for the mid-range smartphone with water and dust resistant phone, a sharp 13MP camera and 16GB storage with the option to get a further 64GB via microSD card.

Perhaps the biggest feature on the Sony Xperia Z is the water-resistant, dust proof outer cover yet is surprisingly light in the hand. The slim and sleek design with glass outer shell makes the Sony Xperia Z and good looking phone whilst having some great features such as long battery life and waterproof capacity for a metre deep for up to 30 minutes – brilliant for those of us who have accidentally dropped our phones into water before. The USB and charging ports have resistant covers that need to be opened every time you are using them, but this is a small price for pay for the dust and water resistant feature.

Using the same HD display as in its Bravia TV’s, Sony’s smartphone has a 443ppi (pixels per inch) and sharp images. Combined with a 13MP camera, Sony Xperia Z also draws from its Cyber-shot camera using the most useful features to it smartphone camera. 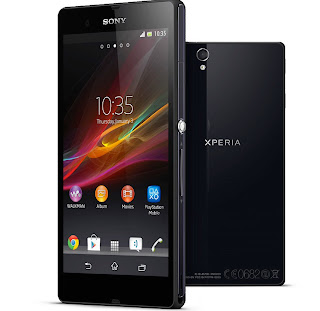 Introduced into the UK market at £529 SIM-free, the Sony Xperia Z smartphone is a similar price to the 16GB version of the Apple iPhone 5, although the Xperia is now coming down in price.

Overall, the Sony Xperia Z is a good phone for the mid-range smartphone market, with some tempting features and a sleek design. As with any phone there are some things that could be improved, such as the display that can looked washed out from a side angle and the covers on the ports of the phone, However, overall its holds its own against its competitors and brings some new features drawing from their background in Sony entertainment technology. What are your thoughts on the Xperia Z?