The iPhone 5s is set to be released on 20 September and comes with some exciting new features to improve on its predecessor, the iPhone 5, with Touch ID, A7 Processor, 64-bit architecture and compatibility with 4G on Vodafone and EE networks.

One of the iPhone 5s smartphones biggest features is the new Touch ID giving users a quick way to unlock your phone and purchase apps through a fingerprint identity sensor rather than through your usual passcode. The Touch ID feature also lets you enrol multiple fingerprints, in case you want to let others access your phone. The iPhone 5s camera remains the same as the iPhone 5 in megapixels but with improvements in autofocus, lens and a larger sensor to allow in more light as well as a Dual LED flash.

One of the features that Apple is most proud of is the new 64-bit, A7 processor and operating system allowing up to 2 times faster CPU and graphics performance (great for gamers) than the iPhone 5 A6 processor. The new A7 processor is teamed with the M7 motion coprocessor which tracks your activity throughout the day by measuring data coming from the accelerometer, gyroscope, and compass. 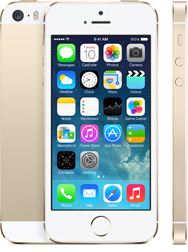 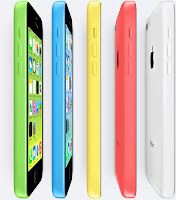 The iPhone 5c essentially has the same features and components as the Apple iPhone 5 but with the updated iOS 7 and a new, colourful, plastic shell.

The iPhone 5S and iPhone 5c will both be available to buy from 20 September 2013.